If you’re wondering who Hyperion is, don’t worry, you’re not alone. Hyperion, the newest self-appointed protector of America, has been on the sidelines of Marvel’s universe from the start. 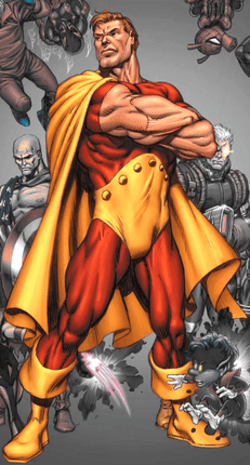 He’s been a villain, a hero, a homeless bum kinda guy for a bit, and a few other things. Right now, Marvel is rebooting him into a Superman clone.  No, really, a straight up clone of the Big Blue.   As in, an alien baby is sent to Earth and discovers he has amazing abilities.

Chuck Wendig, part of the creative team for the new Hyperion, had this to say, “Hyperion is a man who lost his universe. He doesn’t belong anywhere. And as a result, he lost himself and hasn’t yet found who he really is. He’s been taught these precepts by his father, and he believes he is meant to be a teacher, a savior—a father in his own right—and so he adopts America and its people as his children. But he doesn’t understand them, and this is about Hyperion going out into the country to find out who these people are. And, by proxy, who he really is, too.”

Nik Virella, the other half of the creative team, added,

“The most exciting thing about this project is the fact that Hyperion gets to shine in his own series. It’s a new introduction, where he will be able to interact with all kinds of characters and really come into his own. People might not know Hyperion as well as they know the bigger names, so I’m looking forward to giving him that spotlight.”

What do you think, does Marvel need a copy of the Big Blue Boyscout but with maybe some moral greyness (would that make him a Weeblo or an Eagle Scout)?  Let us know in the comments below.