You know Archie, right? A dopey goodie two-shoes that lives in this idealized 1950’s hold-over universe.  He’s got some equally dopey friends and you don’t know anyone who’d read these comics. Ever. And you probably only really know them due to some Joss Weadon quips about a female character being a Betty or a Veronica from Buffy reruns.

But you’d be missing the seriously weird shit that happens in this book. It is a comic so there’s werewolves, zombies, witches, the Punisher, alternate realities that split/merge/split again, and time travel.

And lately the creative team of Chip Zdarsky (artist on the insanely amazing Sex Criminals) and artist Erica Henderson have been tasked with rebooting the teen book to bring it into today’s world.  One of the issues they’ve chosen to address is sexuality.

And not the LGBT sort, but more the opposite of that- asexuality.

They’ve decided to make Jughead asexual.  In an interview with Comicbook.com, Zdarsky said, “There have been iterations of Jughead over the decades where he has been interested in girls, so there’s room to play around if someone was inclined. For me though, I like an asexual Jughead,” he said. “That’s more interesting to me than writing him as just being behind everyone developmentally.”

What impact this will have on the Archie show being developed by Greg Berlanti (Arrow/Flash/Legends of Tomorrow/Supergirl) remains to be seen.

What do you think- is this an interesting character change in a comic universe that had stagnated decades ago or just a naked money grab?  Let us know in the comments below.

5 Nerd News Nightly points if you can name the style of hat Jughead wears and what TV character also wore one WITHOUT using Google.  Leave your answer in the comments below.

Here’s a taste of the specific issue: 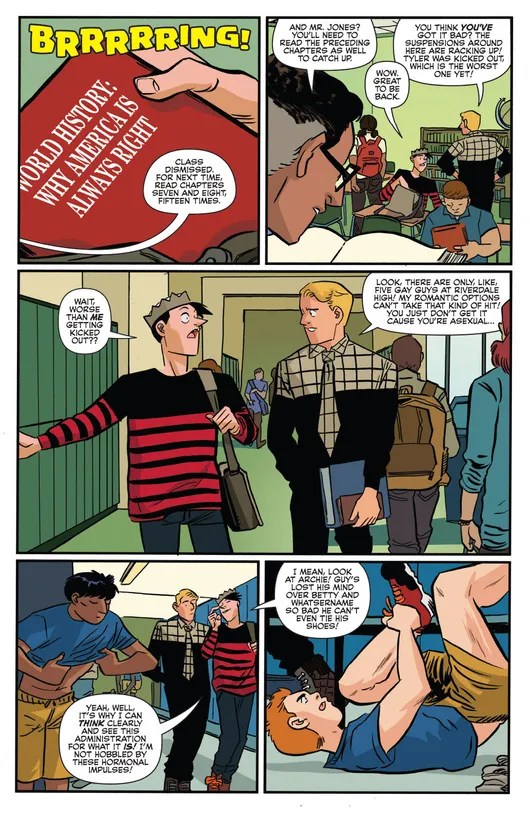 Sex Criminals
You guys- Batfleck is a badass!
Comment