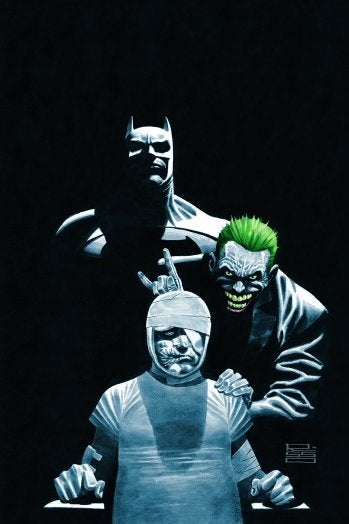 If you don’t know who Paul Dini is, don’t worry, you actually do know who he is.  He’s the creative mind who created Harley Quinn. He’s the guy who wrote the Batman Animated Series episode that gave Mr. Freeze his tragic background.  Paul has had a hand in anything nerdy going back to his first job working on Fat Albert.  The people he’s worked with over the years, like the awards he’s collected, is long and distinguished.

And in 1993 he was violently mugged. From the Hollywood Reporter the mugging left Dini “so bad that parts of his head were shattered – his zygomatic arch, for one — while parts of his skull ‘powdered on impact,’ according to the doctors.”

“What makes Batman and what makes other superheroes work is the myth that when life is at its lowest, and when you need a hero, a hero swings down and helps you,” Dini tells THR. “And I didn’t have that. Here I am writing these stories for an audience that loves this form, in comics, in animation, but now I was saying to myself, ‘I can’t go on with this. I don’t believe in it anymore. There is no hero for me. Where is my hero?’

“The answer is: you have to be your own hero.”

And now after two decades Paul is using that traumatic event to write a story.  The art, handled by Eduardo Risso of the Vertigo crime series 100 Bullets, spotlights Dini’s work. The 121 page book covers the life of Dini at the time- he drinks too much and dates the wrong sort of women. In one particular case his date to the Emmy’s ditches him when she discovers that the Animation portion of the show isn’t broadcast on TV.

Then the assault happens.

And in the days and months following, the cast of Batman and his Rogues Gallery sit on Dini’s shoulders as a series of angels and demons. The Batman becomes a parental figure bluntly criticises Dini, telling him he could have gotten away. The Joker nudges Dini to take it easy and lock himself away inside his apartment.  Dini cites the Woody Allen film Play It Again, Sam as a source of inspiration. He combined that inspiration with his own writing process to conjure up the characters and their dialogue.

“I’m not saying I talk to cartoon characters all the time, but the characters are very real to me,” he explains, quickly adding, “In a very non-insane way.”

Revisiting the attack, even decades later, has been traumatic for Dini. Seeing the attack in the pages of the comic were especially hard for Dini.

“When I first downloaded the pages from the attack, I looked at them very quickly once, horrified. Then I put them away for a week,” he recalls. “I burst into tears. I couldn’t look at them.”

With the book finished and waiting to hit the shelves. Dini says that the burden has been lifted from his shoulders. He said, “I feel like, even if it hasn’t completely, I feel stronger and I can carry it better. I feel like it’s not going to crush me.”

Paul Dini talks at length about the assault and how it inspired the book on Kevin Smith’s Youtube channel Fatman on Batman.